To those that are new to my “Adventures” welcome. To those that have followed my “Adventures” over the last two years at AcuDoc’s Excellent Adventure aboard the cruise ships the Carnival Dream and the Royal Caribbean Rhapsody of the Seas throughout the Caribbean, Canada, Alaska, Hawaii, the South Pacific and Southeast Asia welcome. Welcome ALL to AcuDoc’s Excellent YOSEMITE Adventure!

After two years traveling to different parts of the world I have settled down in one the worlds most beautiful places…Yosemite National Park.

In the early 80’s while working in Yosemite I was the assistant kitchen manager of The Loft, when it was a real restaurant. It would close for the winter and over the years I was a lift operator at Badger Pass, assistant manager of Degnan’s Deli, at the Ahwahnee Dining Room, Employee Recreation and also did a little time one summer at White Wolf.

Yosemite has always been a very special place for me, it is where I go to heal and I am living in Yosemite once again. I always said that maybe some day I’d come back and be the old guy behind the cash register and that is exactly what I am doing.

With all that said the purpose of this blog will be multifaceted. One will be to briefly touch on what it is like to live and work in Yosemite. However the main focus will be to share my opinion on photographing Yosemite and to share some of my adventures as I hike and backpack many of the trails in the park and the surrounding area.

I will start out as the same format that I did working for Steiner as an “Acupuncturist at Sea”. I’ll give you the ins and outs of working for the Delaware North Company in Yosemite.

YOSEMITE:
Okay now lets talk Yosemite. Yosemite is almost the exact same size of the state of Rhode Island with a couple thousand employees. There are a few different areas within the park and the following is a very brief description.

I live in Yosemite Valley, which is an area of about 10 square miles. It is surrounded by 2,000 to 3,000 foot granite walls craved out by a glacier 24 millions of years ago. The Merced River runs the length of the valley and there are also many waterfalls. The most well known is Yosemite Falls which is the second highest water fall in the world spilling over the cliffs 2,425 feet. 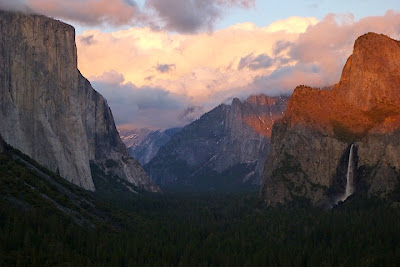 There are a few trails that lead up “the walls” like the Four Mile Trail (actually 4.8 miles) and the Panorama Trail (around 8-9 miles) that goes to Glacier Point, the Yosemite Falls Trail (3.6 miles) to the top of the falls and Snow Creek Trail out of Teneya Canyon. 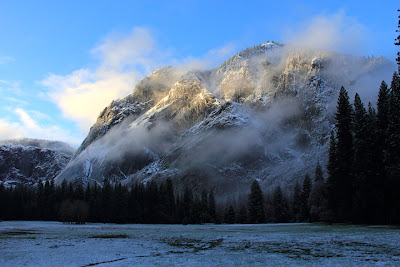 Glacier Point on the way to work one morning last week 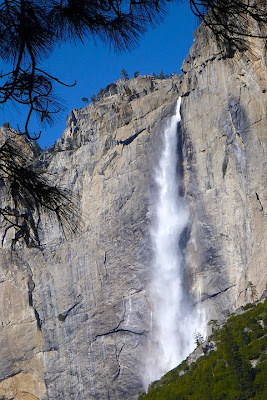 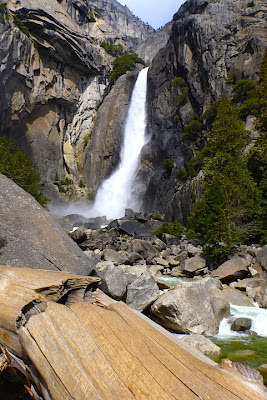 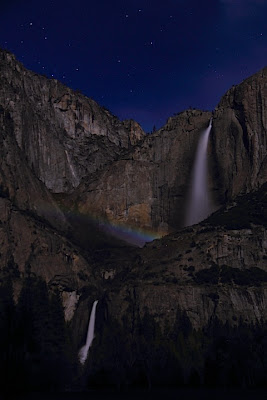 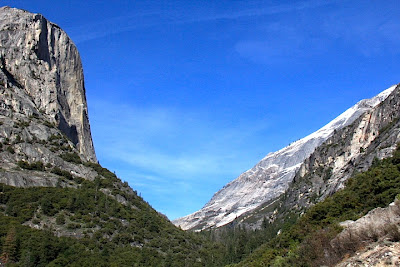 The “High Country” is the area around Toulumne Meadows, which is the highest meadow in the Sierras. There are several “high sierras camps” some you can drive to others are located in the backcountry. “The Meadows” is surrounded by granite peaks and domes and has a river cutting through it also.

There are high sierra lakes and flowered meadows and many trails to discover. Some lead away from “The Valley” and some trails can be taken to Yosemite Valley but it will take you a couple days as it is about a 24 mile hike. I love the high country and can’t wait for the snow to melt so I can start visiting and photographing favorite places and exploring new ones.

There is also the Wawona area, which is near the south entrance of the park. There you will find the historic Wawona Hotel. It has the feel and look of the western Sierras in contrast to the rest of the park that is surrounded by granite and peaks. There too you will find many trails to explore and to be honest I have not spent much time in this area.

As I said that is a very general description of the park and will give you an idea of what to expect.

EMPLOYMENT:
The first thing that is different about working in Yosemite now is “Ma Curry” or The Curry Company no longer has the concessions. It is now The Delaware North Company or DNC.

Once hired you are given a start date and when you are to arrive for orientation. Depending on your position it will determine what orientation classes you are to take. Everyone does the housing and safety orientation. There is cash handling class and food safety for those that need it for their job.

You will also find out what housing you have once you arrive. It is either in a 10x12 foot tent with a wooden floor and a couple dressers or if you are lucky you will get into a dorm room right away. I was lucky and I am living in the Tecoya Dorms near Yosemite Village and about a half mile from work or a 15 minute walk. You will also have at least one roommate and in some cases two, I have one. 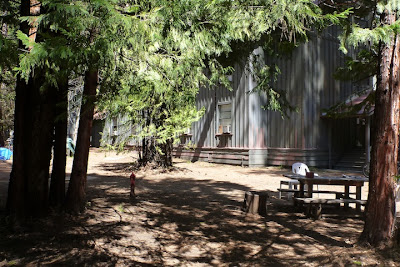 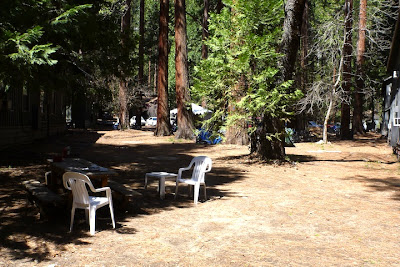 The "yard" at the Tecoya Dorms

For my shipmates the rooms are more then twice as the size of the cabins on the ship. All housing areas also have kitchens, free laundries and “common” rooms with television. You also have television in your dorm room with the local channels or you can get Dish TV if you want more channels. 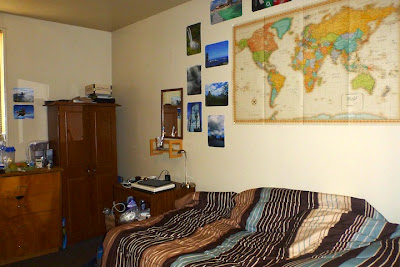 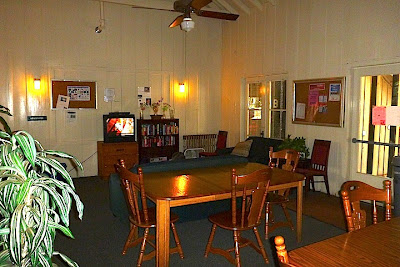 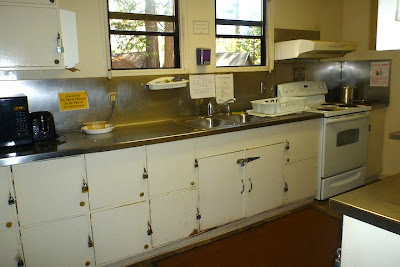 Internet is available at the Wellness Center in Curry Village. There is a problem with getting “new” Internet service right now in the dorms but they are working on it. Some people have existing accounts in the dorms that work fine. For now I just go to Curry.

There is a Wellness Center and Employee Recreation manages it. The manager of Employee Rec is Emily and she seems to be on top of just about everything. There are many activities including free shuttles to both Merced and Fresno for “shopping days” as well as yoga classes, a weight room and generally fun things for employees to take part in while living in the park.

As far as working for DNC it is what you are expected to do in any job. Show up on time, do your job and cater to the guests. For me I accepted a position at the Ahwahnee Gift Shop. The Ahwahnee is a four diamond historic hotel built in 1927. For those that have seen “The Shining” parts of the hotel were recreated in the movie so it is very similar to the hotel in the movie. It is a truly beautiful hotel and I enjoy working there.
Posted by AcuDoc at 11:31 AM