WELL THAT WAS STUPID....

WELL THAT WAS STUPID…

I was determined to day hike the Pohono Trail from Glacier Point to Tunnel View. The weather was against me a couple weeks ago so I thought I would try again today. The weather was perfect for backpacking, sunny and slightly cool so off I went.

Instead of hitchhiking I took the bus one way to Glacier Point, which is $12.50 for employees. I spent a few minutes enjoying the view and took a couple photographs I was unable to last time here as clouds hid the view. 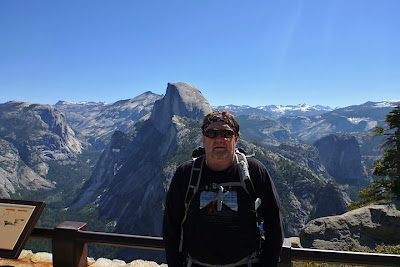 The start of my hike from Glaicer Point
As I started up the trail I decided it was too hot to be in a long sleeve shirt so I stopped for a couple minutes, dropped my pack and changed my shirt and began the steady uphill climb through the forest. It did not take long until I reached the top of the trail about .8 miles from the trailhead. As I came out from under the trees I noticed the clear blue sky and how bright it was. Then I thought it probably would not be SO bright if I had not forgotten my sunglasses at the bottom of the hill!

When I had changed shirts I had taken off my sunglasses and set them on a tree stump and took off without them. Now I had to hike not only back down the trail to retrieve them but do all that uphill again and waste about 45 minutes doing it. Now “that was stupid” I thought…live and learn…

Back on top I rounded the trail and got my first glimpse of Half Dome and Nevada and Vernal Falls peeking out from the trees over my shoulder. 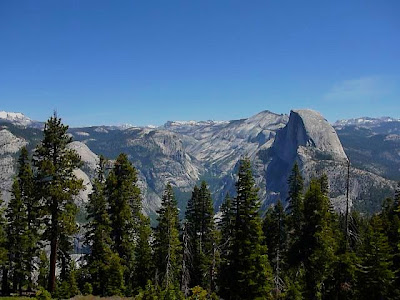 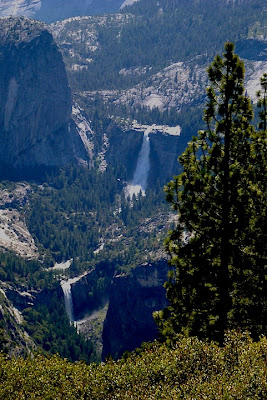 After taking a couple photos I noticed I was not alone, about thirty feet away was a small mule deer maybe a year old enjoying the day as well. 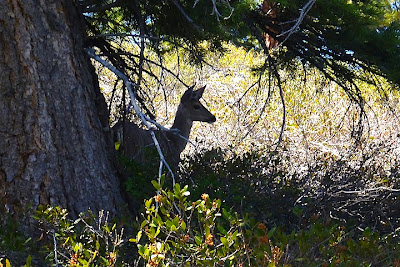 A companion on the trail...

A few more steps and I decided to leave the trail and look for a different view of the valley. 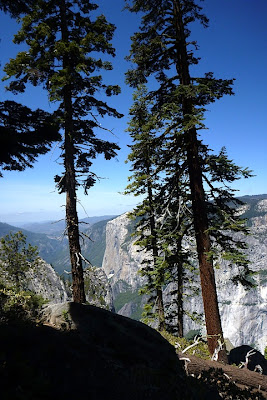 Off trail shot of El Capitan 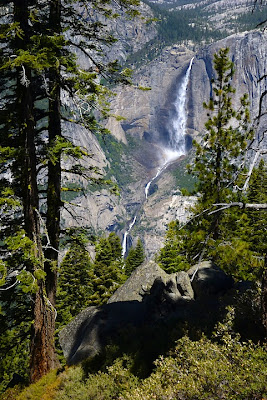 A little further off trail and being careful I found a spot that had an amazing view of Yosemite Falls including the middle section of the falls cascades. 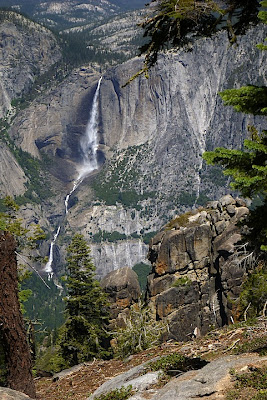 Yosemite Fallw in its entirety...
all three sections
A few minutes later I was back on the trail and headed towards Taft Point about two miles away. To the left was the trail intersection for Sentinel Dome. It is a little hard to notice going this direction and I had to point it out for a couple hikers that overshot it. A little further along the trail is a nice lookout of the valley, Yosemite Falls and El Capitan. 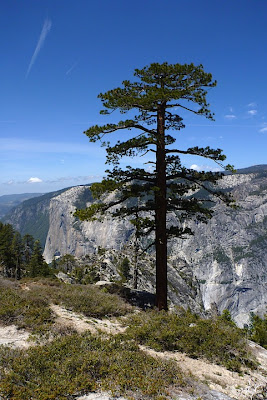 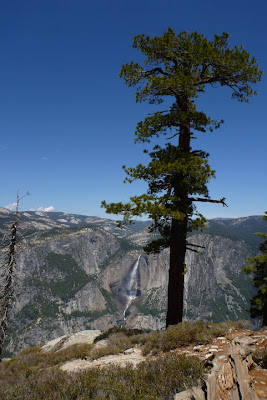 Continuing down the trail there is a nice shot of Yosemite Falls through “Gunsight” and the backside of Sentinel Rock. A little further a path leads of to the right and you can go to the edge of Sentinel Creek as it plunges over the cliff. 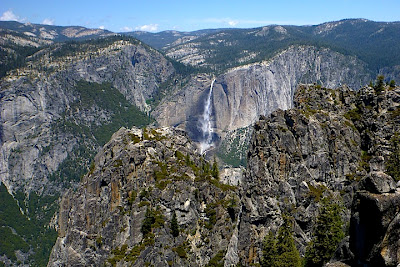 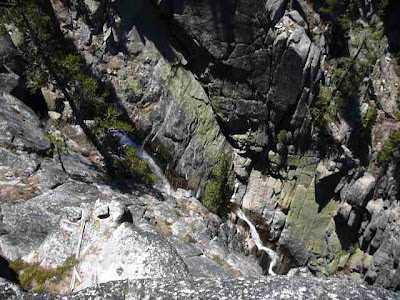 Looking over the edge at Sentinel Creek

It is not far from here that you reach Taft Point and The Fissures. Don’t be surprised by the number of people here. There is a trailhead only 1.3 miles away. The lookout on Taft affords an amazing view of the valley and a great place to stop for a break. 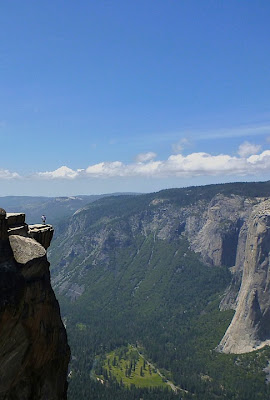 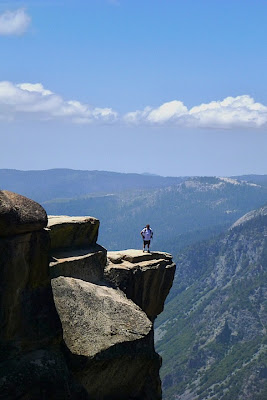 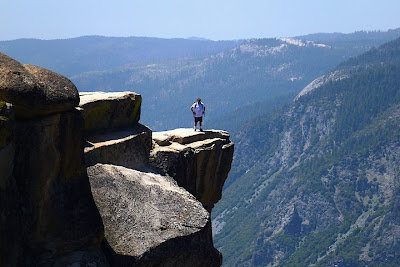 lon-g-g-g-g-g way down from Taft Point

After a short stop for a few photographs I was once again on the trail. From here it is about four miles to the next overlook of Dewey Point. The trail turns way from the rim and through Bridalveil Meadow for most of the hike. The crossing of Bridalveil Creek is by footbridge so not to worry even in early season. 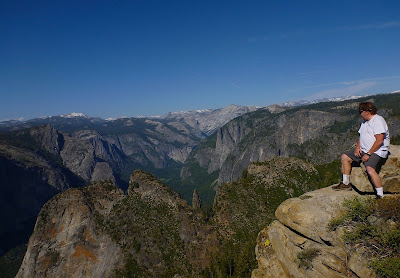 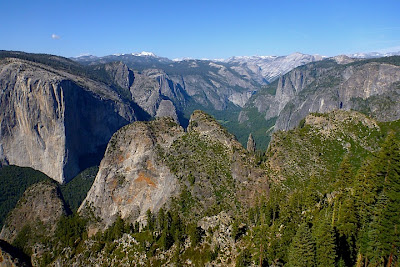 The view from where I sat on Dewey Point

Reaching Dewey Point I sat on a rock overlooking the edge and had lunch. What made it especially nice is that there was nobody there unlike Taft Point that had close to a dozen people when I was there. Even the trail was almost void of people having only met a young girl and her grandmother.

Next I was headed to Crocker Point less then thirty minutes away. Crocker Point was my favorite so far as you not only had a nice view of the valley but it looks down on Bridalveil Falls. 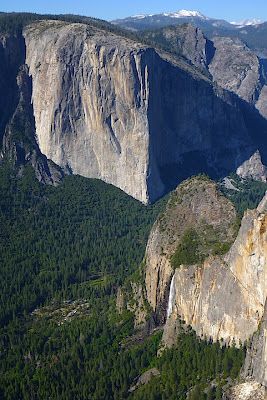 Crocker Point and the view of
El Capitan and Bridalveil Falls

After another thirty minutes you reach Stanford Point again as with Dewey and Crocker Points not a person to be found. In fact since I left Taft Point I saw only two people on the trail verses a couple dozen from Glacier Point to Taft Point especially after reaching the Sentinel Dome trail junction. 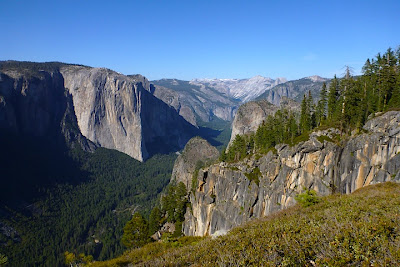 It was not much further to Tunnel View but all three miles were downhill, multiple switchbacks and covered with either pine needles or loose rock. Both which were not much fun for my knees. It is very easy to slip on pine needles and rocks whether you have bad knees or not.

This entire portion of the trail you are walking under a forest and only get an occasional view of the valley. Even from Inspiration Point it is nearly identical to the view from Tunnel View. Also from Inspiration Point to Tunnel View, which is only around a mile is the worse part of the trail. It is over extremely uneven rocky terrain and it makes for some tough hiking. 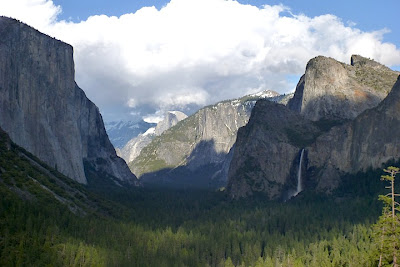 The end of the trail Tunnel View

The Pohono Trail is a great hike for a number of different views of the valley. You can see Yosemite Falls and El Capitan from any number of places as you hike throughout the day.

From what I have read and looking at the map the trail can be a little deceptive. You climb up and down about four canyons but none of them are very steep or very long. There is a fair amount of flat or near flat portions of the trail as well.

Would I do it again…absolutely and plan to in the near future. If you hike the Pohono Trail be prepared for some fantastic views and if you do the entire trail as I did a long day hike…ENJOY!

P.S. All photograpghs were taken with a pocket camera. I've been asked if you have to have an expensive camera to get nice photographs...you be the judge...

All in all with side trips my gps totalled close to 15 miles for the day...of course yours would be less...if you dont forget your sunglasses on the trail...lol