A couple weeks ago I was planning on doing an overnight hike of the Pohono Trail. The weekend was great weather in the mid to high 80’s but then came my days off and the cold front.

Determined to go hiking I decided to hitchhike to Glacier Point and do a day hike on the Panorama Trail instead. I got lucky and it only took me 1 hour and 40 minutes to arrive to Glacier Point which was totally socked in by the clouds.

I waited for 45 minutes to see if the clouds would break and give me a good photograph of Half Dome but no such luck. So off I went down a trail I have not hiked in thirty years.

The hike start at approximately 7,200 feet and first couple miles are through a burned out area from a fire in 1987. It seemed a little eerie as clouds blocking any views normally seen of Half Dome, Liberty Cap, Nevada Falls and the mountaintops shrouded the trail. Still it was refreshing just to be out in nature. Half Dome peeks out from the clouds for a moment

A little over the two mile mark of downhill and switchbacks you arrive at Illilouette Falls Lookout which sits upon an overhanging cliff. It is just off trail a few steps and a worn path leads to it. Be careful not to get too close otherwise you are assured to take the quick way down to the bottom of the canyon. 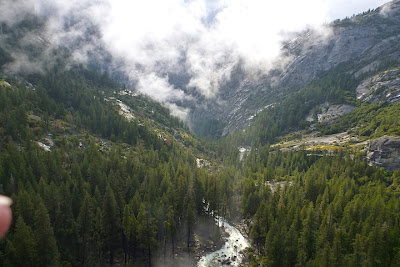 This was my first opportunity to take pictures on the trail this day and it was well worth the wait. You are above Illilouette Falls and being cautious you are able to photograph the falls from top to bottom along with shots of Illilouette Canyon. After I took a short break and got the pictures I wanted I continued down the trail. 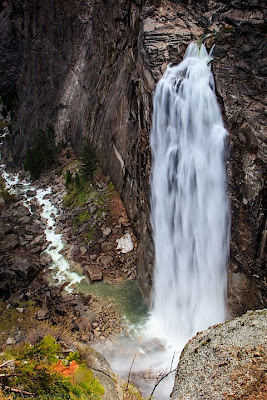 Looking Down on Illilouette Falls

At the two and a half mile mark and at an elevation 6,430 you arrive at Illilouette Creek, which is crossable by a steady steel footbridge. Be careful not to swim or soak you feet in the river, as it would be a short ride in the swift water over the falls. Those of us that live in the park know how many people die every year from seemly safe places to swim or even soaking your feet only to slide into the water. 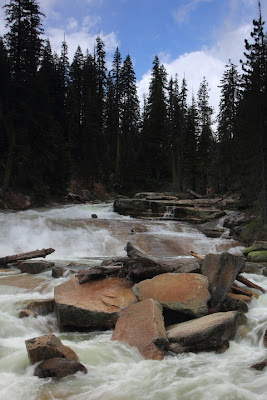 Illilouette Creek from the bridge

After a few photographs I now found myself hiking uphill out of the canyon. It just stands to reason if you hike down one side of a canyon even if your destination is 3,000 feet below your starting point you are still going to have to hike out of a canyon or two along the way. 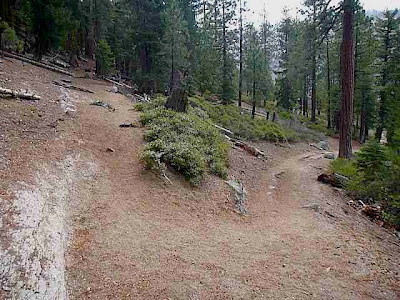 A typical switchback making my way
out of Illilouette Canyon

And so I started up the trail and left the river behind. On the Panaroma Trail it is only about a mile and a 1,000 foot elevation gain from the bridge so it is not too bad. After approximately the half mile mark you find a footpath leading off to the left to Panorama Point. Here there was a large rockslide in 1968-1969 and it is thought that it may again tumble at anytime. It is a great place to view and photograph Royal Arches, Washington Column, North Dome and the backside of Half Dome. 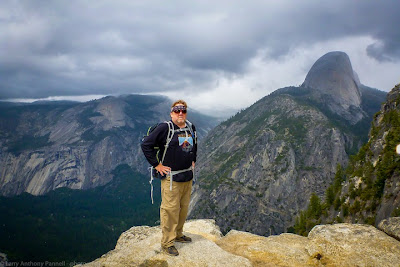 After a lunch break at Panorama Point

Continuing on the trail keep you eyes open as you are afforded glimpse of Yosemite Falls in the distance. Once you reach the top at approximately 6,600 feet the trail turns and your view changes to Nevada Falls, Liberty Cap and Little Yosemite Valley. 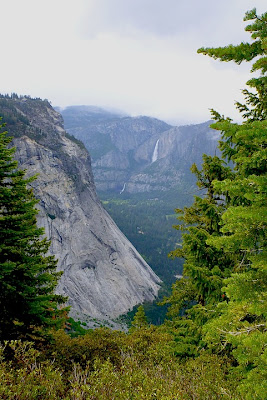 Yosemite Falls from the Panorama Trail

From here I felt safe having years of experience hiking in the Sierra and the Rockies to go off trail looking for a better viewpoint for a photograph I had in mind of Nevada Falls. There was more then one place that I turned back noting it was too big of a chance and the footing was not stable. Finally I found what I was looking for, a place that I had a great view from Little Yosemite Valley to Nevada Falls, Vernal Falls and of the Yosemite Valley and Yosemite Falls in the distance. 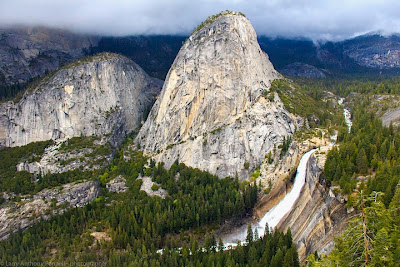 The off trail shot of Nevada Falls I was looking for 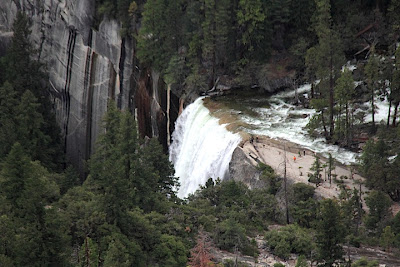 Vernal Falls and search party on the Silver Apron

My friends know I have a saying that is very true. I have been 40 miles out on the Sea of Cortez in a 17 foot fishing boat chasing yellowfin tuna, I have hike hundreds of miles in the mountains and sat on 12,000 foot mountain tops and I don’t care where you are “the is only ONE rule in nature…you SCREW up you die…DON’T break the rule!” Unfortunately he “broke the rule” and got to close and slipped into the water. 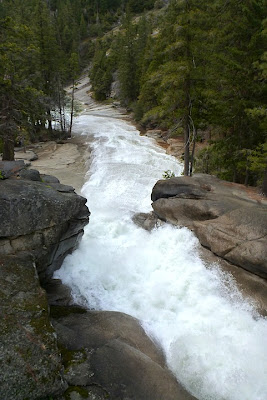 The stream between Nevada and Vernal Falls

After taking a break and noticing the hour it was time to start hiking again. As I began walking the weather changed again and it started to snow. It was just a few miles ago when the weather also changed from rain and hail to sunshine and I thought of putting on shorts and a t-shirt. Now I was glad that I had on my long sleeve shirt, vest, hat and gloves. I had also come prepared and had my Northface jacket in my pack.

More then one person I met on the trail was only dressed in shorts and a t-shirt and I heard them say, “you are better prepared then we are”. I just thought “I live here I know what can happen” and smiled. I also thought to myself how can these people be dressed like that with the sky is dark, cloudy and grey? They are “breaking” the rule…

With that said I continued down the trail to the top of Nevada Falls. Here I met a couple from Ireland that had no map (breaking the rule) and could not find the path to the Mist Trail. I decided to show them the way even though I did not relish the thought of doing the Mist Trail with my knees after all the operations I have had. Off in the distance I could see the valley was being rained on so it was time to get moving again. Once on the correct trail we said our goodbyes, as they were much younger and can move quickly and I am very cautious on steep trails not really trusting my knees anymore. 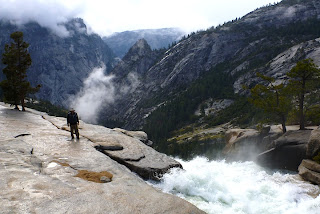 At the top of Nevada Falls

I could see them bounding towards the Mist Trail as the distance between us grew. That is okay I’ll just take my time as I slowly made my way towards Vernal Falls. 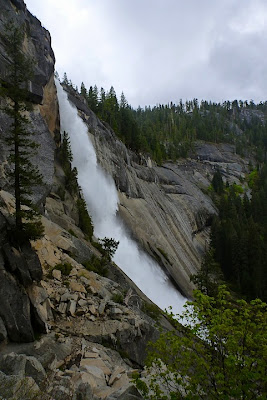 Nevada Falls as I continue towards the Mist Trail

Once there I took my time crossing the Silver Apron, as it was slick from the rain. I knew enough to stay well back from the waters edge so there was no chance of slipping into the river and going over the falls which has happened many times at this location.

All of a sudden before I had time to think my feet shot out from underneath me and I landed hard on my left shoulder. Ow-w-w that hurt a lot! My first thought was “did I dislocate my shoulder?” Because of my medical background I knew how to check for this. Thankfully it was not dislocated but it was injured to the point I could not move my arm very much and could put no pressure on it.

My next thought was even though I did not hit my head on the rock, which was a miracle in itself, I really rang my bell. I tried to stand but I was very dizzy and I was disorientated. “Great I am going to have to hike down the Mist Trail not only with bad knees, an injured shoulder but with a concussion!”

I decided it was best to sit for a few minutes and assess the situation. Worse case scenario I’d have to stay the night here on the trail. I have food, warm clothes and the means to make a fire. Also I did not break the rule and told two or three friends exactly what trail I was going on and when I planned on being back. This is probably the Number One Rule of Backpacking…ALWAYS tell someone where you are going and when you are to be back!

After a few more minutes I decided to try and stand again. This time it was effort free except for the shoulder of course. But there was no dizziness, ringing of the ears, I was coherent and able to process thought patterns I came up with…no concussion.

So off I went down the Mist Trail step by step down 600 stairs. Actually because I could not brace myself with my left arm and wanted to be extra careful not to slip again it was double step by double step making it 1,200 stairs. 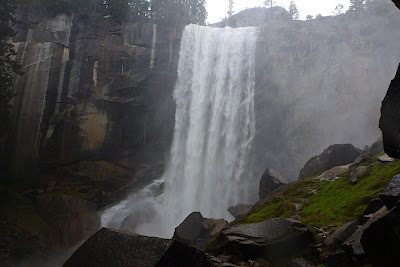 Vernal Falls on the Mist Trail

Half way down I encountered two rangers climbing up the trail. Once at the bottom of the trail I found that they had closed the trail and assumed they were doing the Mist Trail/John Muir Trail loop to look for hikers as it was dusk.

Now at the bottom of the trail and the bridge at Vernal Falls it was only another mile down the trail to the shuttle stop and home to a hot shower. 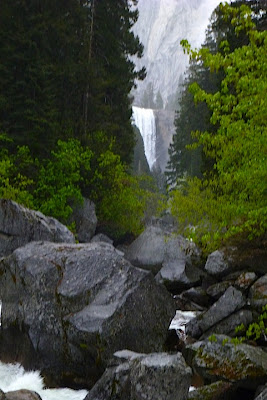 I had also been thinking the entire time that I can’t wait to get back to my room and do acupuncture on my knees and especially my shoulder. Arriving back at my dorm I realized my needles were in my truck parked a few miles away at Tunnel View where I had started the morning hitch hiking to Glacier Point.